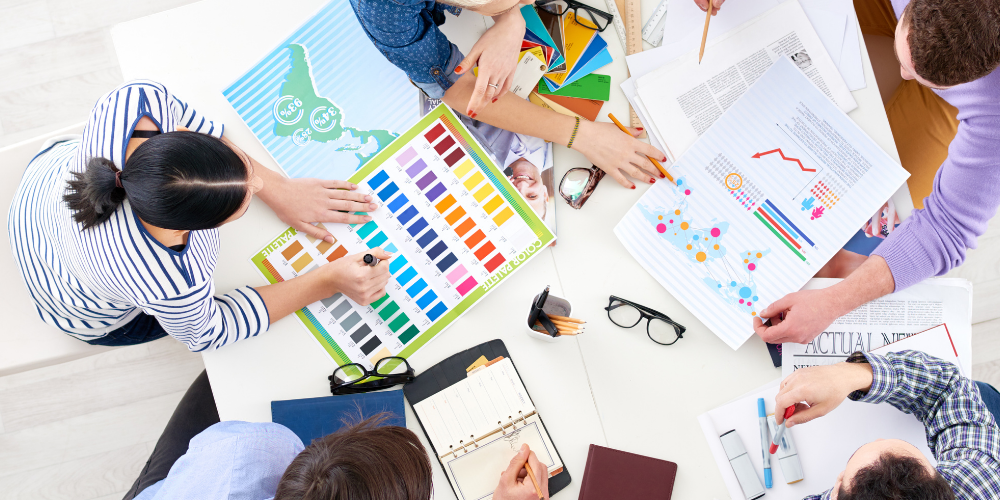 Collaboration is when two different people, groups or companies join forces to make the best use of their respective skills and produce something that neither could achieve on their own.

In 1986, Aerosmith and Run DMC collaborated, rather improbably, on the song ‘Walk This Way’, it was a top ten hit around the world and has been inducted into the Grammy ‘Hall of Fame’. Their collaboration gave both groups a massive career boost.

In the mid-seventies, electronics engineer Steve Wozniak was looking for a market for his inventiveness while his visionary friend, Steve Jobs, was looking for a direction for his restless ambition. When they collaborated, the end result was Apple Computers.

Collaborations are worth more than the sum of their parts.

In business, Nielsen argues that collaboration is essential for the future of the planet and points to the importance of their Project 8 initiative, which is an open data collaboration platform focused on sustainable development data and human needs perspectives.

Collaboration in the digital age

It’s never been easier for people who aren’t physically in the same room to collaborate. Clearly, 2020 has thrown the spotlight on this as the only way that many businesses can continue to function but, that notwithstanding, digital collaboration has become the principal way that businesses can access the most talented people in the most convenient way.

Workplaces are no-longer limited to functioning in one physical place, many workers are no-longer chained to the steering wheel for hours on end as they commute vast distances to those physical spaces but can, instead, focus their time and energies on actually achieving something worthwhile.

As Deloitte says in its Digital Workplace study, this means that “employees are communicating and collaborating in unprecedented ways”. It stresses that digital work platforms allow workers to share and pass on their skills and expertise in a previously-unseen way.

That being so, let’s look at some of the online tools that help us connect, communicate and collaborate.

Google Drive passed one billion downloads in 2018; at which time it stored 2 trillion files and had over 800 million daily users. That means a lot of people and a lot of businesses are working collaboratively in Google Drive.

Within Google Drive, you’ll find Google Docs, which is a very robust word-processing platform that lends itself brilliantly well to collaboration.

This delightfully low-tech video from 2007 explains the benefits of several different people working collaboratively in the same document at the same time in what would later become known as ‘the cloud’:

Among the benefits of Google Docs is that it works very intuitively, if you can use Microsoft Word you can likely also use Google Docs; but it also offers lots of additional features such as ‘voice typing’ and translation tools.

Another huge benefit is that it’s free (up to 15GB of storage) – it’s one of the apps you get automatically when you create a Google account – which can be a massive win for small businesses.

InVision is a collaboration tool for designers. One of the eternal dilemmas for designers is how to present works-in-progress to clients. InVision allows you to turn designs into interactive prototypes, complete with active button clicks, transitions and even animations. Clients and collaborators can then annotate these designs live, in the app.

The first project is free, so you can get a feel for InVision and decide if it’s worth going pro with a paid plan.

You can see InVision here.

Back in 2017, research showed that 82% of businesses were dependent, at least in part, on Microsoft Office. Since then, the collaboration platform Microsoft 365 has been adopted by over a million businesses, worldwide. The strength of his suite of cloud-based apps is the familiarity people already have with Office. Microsoft 365 combines those Office apps you know and love with Outlook, OneDrive and Teams, among several other useful features.

For those who don’t use Windows computers, there has long been a resistance to using Microsoft apps. But now, because it is ‘in the cloud’, Microsoft 365 functions equally well for Windows and Mac OS devices, as well as on Android and iOS mobile platforms.

You can find Microsoft 365 here, any day of the week.

If you’re marshaling a workforce that is working from their various homes, or regularly liaising with freelancers, Slack can be a valuable collaboration and communication tool.

You can Direct Message people, or create groups (which are called ‘Channels’) and then message everyone within that group, or individuals. You can upload documents and links which others can access. Individuals within teams can then break away and have side-discussions within a channel, without the need to interrupt others.

If you have a busy workflow with many ongoing jobs or clients at different stages, Slack offers a great way for everyone to stay in the various loops, without messages getting confused or lost.

You can pick up the Slack here.

The Trello desktop resembles a cork-board with cards pinned to it – which was a tried-and-trusted organisational method back in the analogue days. The working areas are, therefore, called ‘Boards’. Each of the cards on a board is so much more than a sheet of paper, though. You can add tasks to a card, break those tasks down into individual elements or stages, assign people to do those elements and set deadlines. People who are associated with that card can then swap messages about their progress.

Importantly, Trello can be integrated with other apps such as Evernote, GitHub, Google Drive or Slack – so it can be a very versatile project management tool.

Trello is free, so you can give it a try and see if it suits your workflow, then consider a paid subscription which will unlock additional collaboration and management tools.

You can say ‘Hello’ to Trello here.

How do you collaborate?

What online tools have you found particularly useful for collaboration during this most challenging of years? If you find us on Facebook or Twitter and tell our other users, that would be most collaborative!